HB 377 aims to prevent schools and universities from teaching students of certain demographics that are inferior or superior to other students or that they are “inherently responsible for 41 actions committed in the past” by other members of the same demographics.

The bill, which passed in a 28-7 vote, would also “prohibit the expenditure of moneys for certain purposes” related to the bill.

“This bill is Idaho’s statement that we will not tolerate discrimination and we are reserving education policy and curricular choices to the state and local institutions and schools,” state Republican Rep. Wendy Horman, who co-authored the legislation, said in her floor speech on Monday. 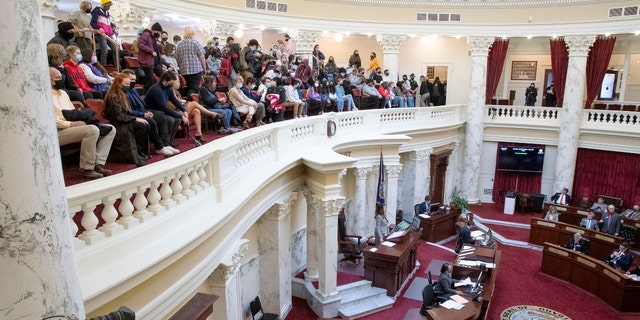 Idaho students fill the gallery as H377 is debated and passed by the Idaho Senate Monday, April 26, 2021 at the Idaho Statehouse in Boise. (Darin Oswald /Idaho Statesman via AP)

Republican state Sen. Jim Rice argued that the bill contains the “same principles that have been the foundation of the Civil Rights movement.”

“It’s that every individual should be treated equally under the law, that no one should be compelled to believe something just because someone else does,” he said.

The legislation comes as some state and local education departments, as well as individual schools, across the country work to implement critical race theory or ethnic studies curricula.

Critics of HB 377 say the bill is irrelevant to Idaho’s current education system and could stifle classroom discussions about difficult topics that will leave Idaho students lacking knowledge and understanding.

Some Idaho students protested the bill during Monday’s Senate vote. 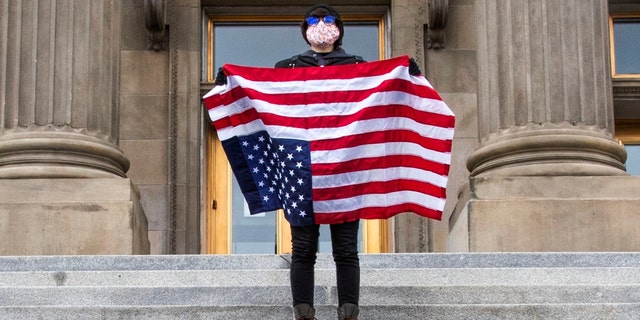 A student holding a U.S. Flag upside down stands atop the steps at the Idaho Capitol Building Monday, April 26, 2021 in Downtown Boise. (Darin Oswald /Idaho Statesman via AP)

“The bill is looking for a problem that doesn’t exist in Idaho’s public education system, where students are not learning lies about American history,” Democratic Idaho state Sen. Ali Rabe told Fox News in a statement. “The bill could stifle free speech in the classroom on topics related to race and sex. Students are at risk of being precluded from learning about objective historical truths.”

He added that the bill would allow “any parent, student, or third-party organization” to sue schools, universities and faculty “for discussing anything ‘prohibited’ in any classroom that offends them,” calling the legislation a “legal nightmare.”

But Republican state Sen. Carl Crabtree, the bill’s cosponsor, argues that the “bill does not intend to prohibit discussion in an open and free way.”

“It is a preventative measure. It does not indicate that we have a rampant problem in Idaho. But we don’t want to get one,” he said.

The legislation now goes to Republican Idaho Gov. Brad Little’s desk. GOP lawmakers in the state have been holding up crucial education budget bills until some type of bill addressing what can be taught in schools is passed. The House earlier this month killed a $1.1 billion teacher pay bill for that reason.

The Associated Press contributed to this report.