During a rally in Duluth, Minn., on Wednesday, President Trump said that Democratic presidential nominee Joe Biden would turn Minnesota into a “refugee camp” and open “the flood gates to radical Islamic terrorism” if elected.

His remarks came on the same day the State Department announced a new 15,000-refugee admissions cap to ensure the “safety and well-being of Americans, especially in light of the ongoing COVID-19 pandemic.”

“Biden has even pledged to terminate our travel ban on Jihadist regions, opening the flood gates to radical Islamic terrorism,” Trump said of his administration’s 2017 order banning travel from Iran, Libya, Syria, Yemen, Somalia, Venezuela and North Korea, which the Supreme Court upheld in 2018.

He added that Biden would turn Minnesota “into a refugee camp,” “overwhelming public resources, overcrowded schools and inundating your hospitals” in reference to the former vice president’s plan to raise a refugee admissions ceiling in the U.S. from 15,000 people to 125,000. Former President Obama set an annual cap of 110,000 refugees in 2017.

“We cannot mobilize other countries to meet their humanitarian obligations if we are not ourselves upholding our cherished democratic values and firmly rejecting Trump’s nativist rhetoric and actions,” Biden’s website states. “… [Biden] will set the annual global refugee admissions cap to 125,000, and seek to raise it over time commensurate with our responsibility, our values, and the unprecedented global need.”

TRUMP CLAIMS DEBATE VICTORY OVER BIDEN: ‘I HELD JOE ACCOUNTABLE FOR HIS 47 YEARS OF LIES’

Trump also brought up Democratic Minnesota Rep. Ilhan Omar, saying, “I’ve been reading these reports for over two years about how corrupt and crooked she is,” then asking the crowd: “How the hell did Minnesota elect her? What the hell is wrong with you people?”

The president suggested during an earlier Sept. 22 rally in Minneapolis that Omar would help him win the election, saying, “How about Omar of Minnesota? We’re going to win the state Minnesota because of her, they say.” 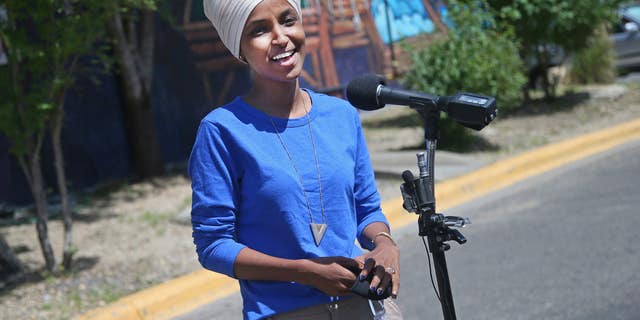 Omar — one of four progressive congresswomen referred to as “the Squad” — and Trump frequently criticize each other on social media and during political events. She is a Somali refugee representing Minnesota’s 5th District.

Minnesota has the largest population of Somali-Americans than any other state with 69,000 people who claim Somali ancestry, or 40% of the entire Somali-American U.S. population, according to local news outlet WCCO.

Omar retweeted a Wednesday post from former deputy national security adviser Ben Rhodes that included a clip of Trump’s refugee comment at the Duluth rally, saying, “Refugees – from the Holocaust to Vietnam to Somalia – made this country great. Started businesses, enriched communities, made us better. They’re much more American than this fascist lightweight.”