“Today’s my last day at CNN,” Harwood tweeted at noon, thanking his colleagues and saying he was “proud” of the work they did together. “[L]ook forward to figuring out what’s next.”

u201cpersonal news:nntoday’s my last day at CNNnnproud of the worknnthanks to my colleaguesnni’ve been lucky to serve the best in American media – St. Petersburg Times, WSJ, NYT, the NBC family, CNNnnlook forward to figuring out what’s nextu201d

A spokesperson for CNN confirmed Harwood was no longer employed in a statement to the Hollywood Reporter.

“We appreciate John’s work covering the White House, and we wish him all the best,” the CNN spokesperson said.

The outlet reported that Harwood learned he was being let go by CNN last month. He joined the cable news network in Jan. 2020 after working as the chief Washington correspondent for CNBC.

The reasons for Harwood’s departure are as of yet unknown, but he is not the first highly partisan journalist to leave since CEO Chris Licht took over after Warner Bros. Discovery acquired CNN earlier this year.

Two weeks ago, CNN announced that chief media correspondent Brian Stelter would be let go and his show, “Reliable Sources,” cancelled. Stelter had long antagonized conservatives, who accused him of bias against the right, Fox News, and former President Donald Trump.

Harwood has similarly faced criticism for being sharply critical of Trump and the Republican Party, which he called “fundamentally broken” in 2019.

In 2016, hacked Hillary Clinton campaign emails published by WikiLeaks revealed that Harwood complimented Clinton in conversations with campaign chairman John Podesta, during which he offered to interview her on topics she would be comfortable with. In another email exchange, Harwood asked the Clinton campaign to suggest questions he would ask of Republican presidential candidate Jeb Bush in an interview.

Harwood’s performance as a moderator during the October 2015 GOP presidential primary debate drew widespread scorn from Republicans because at times it seemed he wanted to debate the candidates himself rather than moderate their discussion. Then-candidate Donald Trump called him a “disaster” and said he is “probably finished as a reporter” in a blistering review of Harwood’s behavior.

Harwood leaves CNN at a time when the company is losing profits and viewers. The network’s new leadership under Licht has taken steps to return to neutral, non-partisan news coverage, including letting go of talent.

Licht told CNN staffers in June that more changes would be coming.

“You heard me say in my first town hall that I am going to make decisions slower than some would like,” Licht said. “I know this organization has been through tremendous change over the last four months, which is why I am approaching this process slowly and thoughtfully as we look at all parts of the operation.” 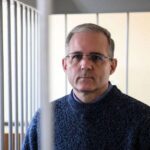