Organizers of a podcast conference in Dallas, Texas, drew backlash Thursday after they took responsibility for “harm” caused by Daily Wire podcast host Ben Shapiro’s presence at the conference.

Podcast Movement, a major annual conference for the podcast industry, issued a profuse apology on Thursday after attendees complained that Shapiro was spotted at the event near the Daily Wire booth. The Daily Wire sponsored this year’s conference and Shapiro, host of the massively successful “The Ben Shapiro Show” podcast, was seen pictured walking around the expo area.

In response to the complaints received, Podcast Movement issued several tweets Thursday apologizing that Shapiro was permitted to attend the event.

“Hi folks, we owe you an apology before sessions kick off for the day. Yesterday afternoon, Ben Shapiro briefly visited the PM22 expo area near The Daily Wire booth. Though he was not registered or expected, we take full responsibility for the harm done by his presence,” Podcast Movement said.

“There’s no way around it: We agreed to sell The Daily Wire a first-time booth based on the company’s large presence in podcasting. The weight of that decision is now painfully clear. Shapiro is a co-founder. A drop-in, however unlikely, should have been considered a possibility.

“Those of you who called this ‘unacceptable’ are right,” the conference organizers continued. “In 9 wonderful years growing and celebrating this medium, PM has made mistakes. The pain caused by this one will always stick with us. We promise that sponsors will be more carefully considered moving forward.”

“Just to clarify, no TDW representatives were scheduled to appear on panels, and Shapiro remained in the common space and did not have a badge. If you have questions, we’re here to talk. Thank you for reading, and we hope you’ll continue to join us from here on out,” Podcast movement added.

The apology and the statement that Shapiro inflicted “harm” by merely existing in the same space as those who disagree with his politics drew backlash from conservatives and other content creators. Shapiro himself mocked Podcast Movement and retweeted many of the replies from people floored by the absurdity of the situation.

“Literally shaking rn. Podcast Movement is threatening my right to exist. This is erasure,” Shapiro tweeted.

“You sound like *completely insane people*. What in the world is wrong with you?” writer Molly Hemingway tweeted. “Is this a joke? You couldn’t tolerate *BEN* *FREAKING* *SHAPIRO*? Are you a child? An anti-semite? An anti-semitic child? How do you function in society if you can’t tolerate BEN SHAPIRO?”

“We believe the problem was contained to the common space, but, full disclosure, we cannot rule out the possibility, however slight, that trace amounts of Shapiro made their way into the building’s HVAC system,” writer Jesse Singal said.

“The fact that this sentence — ‘The pain caused by this one will always stick with us’ — is referring to a human being, @benshapiro , merely being present at a conference while also being conservative shows just how broken our culture is,” observed Faithwire News writer Tré Goins-Phillips.

“Imagine putting on a podcast expo and learning one of the most successful podcasters on the planet in @benshapiro has showed up. Normal, sane professionals would be THRILLED. These guys cowered to the fragile feelings of leftists who hate Shapiro,” CBN News managing editor Dan Andros said. “Pathetic.”

“You probably just destroyed your entire business @PodcastMovement . Everyone should demand a refund and cancel any tickets they purchased to future events. #PodcastBowelMovement,” said YouTuber Viva Frei.

Podcast Movement was reached for comment, but did not respond. TheBlaze also contacted several sponsors of the event who have relationships with the Daily Wire and support “The Ben Shapiro Show” but did not receive responses before publication. 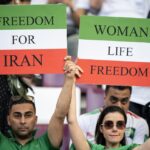