Beelzebub is one of the seven princes of hell. In biblical times, Beelzebub was a god worshiped in Ekron. He could fly. Beelzebub means Satan. In popular culture, he’s known as Lord of the Flies.

The video of seven children stoning and beating James Lambert to death in the streets of Philly reminded me of the iconic 1954 William Golding novel “Lord of the Flies.”

The book explores the barbaric and cannibalistic descent of a large group of young boys who survive an airplane crash on an uninhabited island. “Lord of the Flies” features seven main characters: Ralph, Jack, Simon, Piggy, Roger, Sam, and Eric. The initial alliance among the boys disintegrates into chaos as they’re overtaken by paranoia about an imaginary monster, “the beast.”

“Lord of the Flies” is one of the greatest novels ever written. It expertly depicts man’s battle with morality and immorality, groupthink and individualism, logic and emotion.

Police in Philadelphia believe seven children are responsible for the death of Lambert. Last week, law enforcement released surveillance video showing four black boys and three black girls stalking Lambert at 3 a.m. A young black girl appears to club Lambert over the head with a pylon street cone. Other kids are accused of hitting him with rocks and kicking him.

Unsupervised children on the uninhabited streets of Philadelphia at 3 in the morning terrorizing an old man. This is a crisis of the cultural rot black America has chosen to ignore and/or embrace at the behest of the Democratic Party and the Hollywood elite.

The imaginary “beast” is white supremacy. We spend nearly every waking moment paranoid that the Proud Boys or the Patriot Front or Trump supporters are terrorizing black people. We falsely claim that routine police stops could result in any of us being the next George Floyd.

I don’t use fentanyl and I don’t bicker with the police. There’s virtually no chance of me being the next George Floyd or Eric Garner or Jacob Blake. That’s a paranoid delusion the Democratic Party has asked black people to embrace. I reject it.

No woman in my house will ever be the next Breonna Taylor. I’m not a coward. I won’t allow a woman to walk to the front door with me if I believe intruders are trying to enter. I’ll leave her in safety and deal with the problem myself.

I choose to live in reality and disavow delusion.

The truth is too many black children are living in a “Lord of the Flies” reality. They live on uninhabited islands with little to no adult supervision. There are too many fatherless homes and way too many baby mamas. Black children are descending into depravity and insanity.

It’s not just in Philadelphia. The video out of Minneapolis showing toddlers barefoot and in diapers berating and attacking police is another scene from “Lord of the Flies 2.0.”

Beezlebub has his hooks in our children. Yes, the same goes for too many white children as well. But that’s a deflection, a whatboutism. Seventy-five percent of black children are born to unwed mothers. That’s an uninhabited island, a recipe for violence and chaos.

White people are not in denial that something is going wrong with their kids. They go on national television and talk about it constantly. They complain about the decline in traditional family structure.

We, black people, act like improving white people will fix what’s wrong in Philadelphia, Chicago, Baltimore, Minneapolis, and every other city with a large black population. We act like there’s no benefit to improving us.

Monday, during our interview, Davison amplified his attack on Democrats.

“We’ve got to stand up and fight against these people, the Democrats, because I believe that the evil one, the wicked one, Satan has landed in their hearts and we’ve got to fight before they take away our freedoms.”

I’m sure, to some of you, that sounds hyperbolic and needlessly partisan. A Republican running for Congress argued that the political party of his opponents is possessed by demonic forces. It’s not crazy. Not to my ears. Not if you understand that black children are living in a “Lord of the Flies” reality.

None of them seem willing to deal with the unhealthy reality that is the situation of too many black children. You can’t raise stable kids in unstable, unsupervised communities. Pronouns won’t fix it. Critical race theory won’t fix it. Villages can’t raise kids. It takes two parents, a man and a woman. It takes a commitment to preaching and practicing morality. It takes biblical values.

“Lord of the Flies” is a novel about what happens to young kids when they’re separated from God’s natural order and family structure. Beezlebub and the seven princes of hell take control.

It’s foolish and unproductive to blame “the beast” (white supremacy) for our collective disobedience to God. That disobedience cost James Lambert his life. 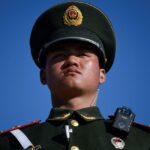