President Biden is set to rally in Atlanta later this week to commemorate his 100th day in office, despite criticizing Georgia officials for their sweeping voting legislation and supporting organizations, like Major League Baseball, boycotting the state.

The White House announced Monday that President Biden and first lady Jill Biden are set to travel to Atlanta on Thursday to participate in a drive-in car rally to highlight “how he has delivered on his promises to the American people.” Thursday is Biden’s 100th day in office.

But Biden has been critical of Georgia and its new election legislation, which he and other critics have said will make it more difficult for minorities to cast their ballots.

After the legislation became law, the MLB pulled its annual All-Star Game from Atlanta and moved it to Denver.

Before the MLB’s decision, the president told ESPN that he would “strongly support” MLB players pushing to relocate the All-Star Game in response to the law, which he called “Jim Crow on steroids.”

The president also, earlier this month, said he supports however businesses decide to protest the Georgia law.

“I think it’s a very tough decision for a corporation to make or group to make, I respect them when they make that judgment, I support whatever judgment they make,” Biden said. “The best way to deal with this is for Georgia and other states to smarten up. Stop it, stop it.” 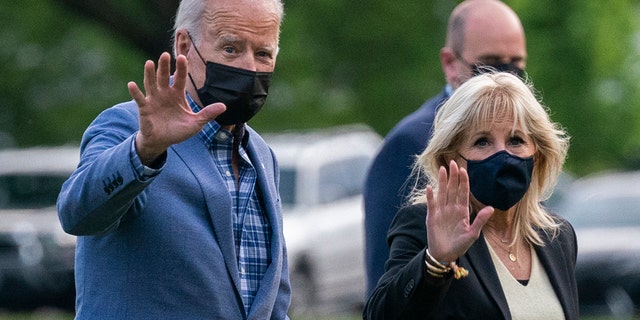 President Biden with first lady Jill Biden wave as they walk on the Ellipse near the White House after spending the weekend in Wilmington, Del., Sunday, April 25, 2021, in Washington.
(AP Photo/Manuel Balce Ceneta)

Earlier this month, White House press secretary Jen Psaki defended the president’s remarks but said that the administration is in no way calling for a boycott of holding events in the state.

“We’re not standing here and calling for companies to boycott,” Psaki said. “That’s not what our focus is on from the White House.”

Psaki said that the White House believes that the focus on Georgia should be a “reminder” that states can use “easily disprovable conspiracy theories to fuel their attempts to make it even harder for eligible Americans to vote.”

“This is not just Georgia,” Psaki said. “This is something – we are seeing a prevalence of this, a pattern around the country, of, you know, an effort to make it more difficult to vote.”

The president, also earlier this month, said parts of the United States are “backsliding” into “the days of Jim Crow,” referring to Georgia’s voting law.

Separately, the president said that it is “reassuring to see that for-profit operations and businesses are speaking up about how these new Jim Crow laws that are just antithetical to who we are.”

The new law requires voter ID for absentee voting rather than relying on signature matching for verification, limited ballot drop boxes to one per county or one per 100,000 voters, expanded early voting days, and standardized early voting hours to a minimum of 9 a.m. to 5 p.m. and a maximum of 7 a.m. to 7 p.m. The legislation also barred outside groups from pssing out food and water to those in line within 150 feet.

The law also handed more election authority to the GOP-controlled state legislature. It states that the General Assembly is to select the chair of the state elections board, rather than the board being chaired by the Georgia secretary of state. It also shortens runoffs from nine weeks to four.

The law was enacted after a Democratic sweep in the Peach State, which then-President Trump lost to Biden by just over 11,000 votes. Trump alleged mass election fraud in the state, and sparred with GOP Gov. Brian Kemp and Republican Secretary of State Brad Raffensperger’s handling of elections.